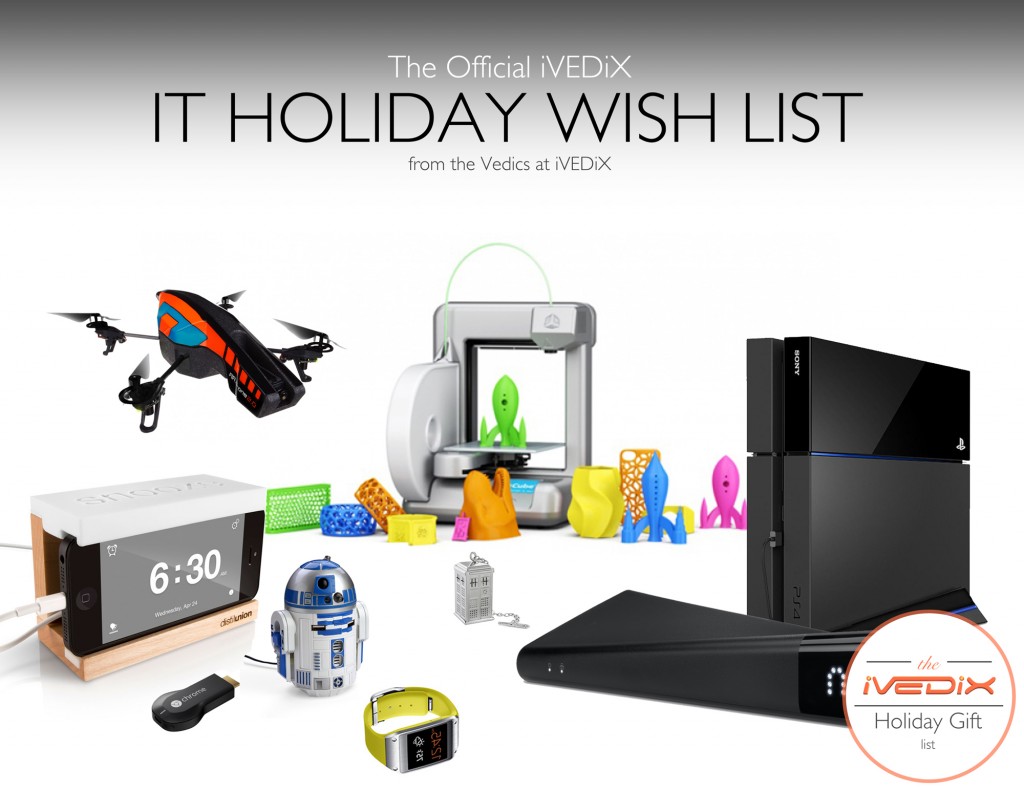 This week, we went around the office and asked the Vedics for some great holiday gift ideas for technology lovers.  We got a variety of responses, from the truly technical to the highly dorkish. Check some of them out:

Google Chrome Cast
Google is always introducing intuitive, useful gadgets, and Chromecast is another in a long line of TV/internet integration devices.  Cast your boring vacation pictures to the TV with ease, and annoy your friends like never before!
Video: http://www.youtube.com/watch?v=cKG5HDyTW8o

SlingBox
Slingbox lets you control your TV viewing from multiple devices, like your phone or your table.  Vedics like it because they can watch football when they are gallivanting across the globe.
Video: http://www.youtube.com/watch?v=g4xo1ZGNzKw

Galaxy Gear
With tablets, phones, netbooks, ultrabooks, laptops, and Google Glass, it seems like one more piece of portable computing was questionable.  But the Galaxy Gear can help you find all of those devices when you inevitably lose them, so it has that going.
Video: http://www.youtube.com/watch?v=GRKMnYd6wCk

Snooze
Fumbling with your phone is an inevitable part of eventually ignoring your alarm in the morning.  The Snooze for iPhone helps you go back to sleep with a minimum amount of fumbling and/or attention to your surroundings.
Video: http://www.youtube.com/watch?v=OONJcLi_qtM

PS4
Nobody should be surprised that at least one Vedic suggested a video game console.  The PS4 is the next phase of Sony’s video game empire, with a heavy focus on sleek design and a preference for games over more general entertainment.
Video: http://www.youtube.com/watch?v=58M2hRJHPHs

AR Drone
Jeff Bezos may be trying to deliver your favorite romance novels via drone, but those are a few years off.  In the meantime, terrify your friends and family with your own drone via iPhone or iPad.
Video: http://www.youtube.com/watch?v=sIoBGBjixRo

iPAD Floor Stand
For those people with a lot of reading to do, but with no free hands.  The stand lets you read while sitting comfortably, or uncomfortably.  You might also have to buy a new chair.
Video: http://www.youtube.com/watch?v=1d9OFiDW5hw

Tardis Tea Infuser
For those people who like tea.  And Doctor Who.  And making tea with Doctor Who paraphernalia.
Video: http://www.youtube.com/watch?v=G7kAwUTSTpg

3D Printer
3D printing is pretty cool, and most Vedics can probably think of a million neat things to print if they had access to one.  Though at least one Vedic would end up just printing a whole bunch of Army men in ridiculous poses.
Video:http://www.youtube.com/watch?v=Osu5MC2PtMI

R2D2 Car Charger
Say what you will about JJ Abrams upcoming Star Wars reboot (lens flare!) but Star Wars toys will always be in style.  Totally weird out your date with this R2D2 car charger, and then never hear from them again because they think you are 13.
Video:http://www.youtube.com/watch?v=PJcSu265p5g