Big Data can go far beyond the technology industry.

Big Data can be such a powerful tool for many services including education and politics. According to Data Scientist Rayid Ghani, data can help Head of Police Misconduct.

With Big Data we can see how a police officer who has been under stress responds to cases for something like suicide or domestic abuse. These officers may be at a higher risk of a negative reaction/response with the public.

Rayid Ghani focuses on using data for uncommon scenarios. He served as the Chief Data Scientist for President Barack Obama during his re-election period in 2012. In present day Ghani is now the director of the Center for Data Science and Public Policy at the University of Chicago. Ghani hopes to have his methods of using Big Data analytics to be used not only to predict political or controversial outcomes but better yet, change them.

Police departments have data that can be properly analyzed to help them predict which officers are at risk of these adverse incidents.  It would be nice to prevent things before they happen. The key is to focus on detecting these interventions early on. Interventions that are detected early can result in better training, counseling and so on.

How does one measure this sort of intervention?

Well, the (KPI) or key performance indicator for this matter happens to be stress. To use an example just imagine the level of stress on an officer exerts who is always responding to domestic abuse or suicide cases. Many of these situations are critical when predicting adverse incidents in the near future. 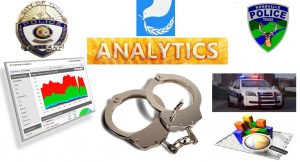 Using historical data is best for this sort of process because of the possibility of collecting biased data sets. Ghani’s work focuses on correcting these biases for making more accurate decisions.

Ghani has helped many different programs develop more targeted and effective actions in order to improve policy. Some examples would be after school programs for kids to help them graduate from school on time.

Ghani’s works with the city of Cincinnati for optimizing their EMS dispatches to avoid over or under dispatching. Ghani also works with Syracuse to predict breaks in the water pipes so, the city can start doing preventive maintenance.

To Sum It All Up

Big Data analytics can be used to create early warning systems to help prevent things from happening. Help allocate resources more effectively. Also to help improve policy in a much more evidence-based way than what we have been doing before (NPR).

Here at iVEDiX our goal is to create an easy way for our clients understand such as educational facilities, hospitals, and even police departments to properly use their data in more effective ways. Visit www.ivedix.com if your interested in learning more and request a demo to see how our predictive analytics platform works for Big Data!