Snapchat and Tinder for the Enterprise? 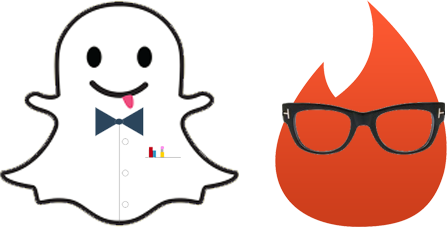 In the words of our founder and CEO, Rajesh Kutty, “It’s not just us, others think so too!” This was the response emailed to us after reading “Mobile First, But What’s Next?” The TechCrunch article focuses on the emerging trend of, what they call, authentically mobile apps –  a term describing services that would be extremely difficult or impossible to achieve without taking full advantage of the unique properties of a mobile ecosystem.

To put this into perspective, the consumer apps space is riddled with authentically mobile apps like: Uber, Tinder, Snapchat, and many more. These applications would loose their usefulness or novelty outside of a mobile environment. These applications are, also, lacking in the enterprise market.

Now, we’re not talking about an enterprise version of Tinder, or Snapchat – that would probably get some people in trouble. But, the enterprise apps market is a 100 billion dollar industry, which authentically mobile apps are poised to control. And according to TechCrunch, there’s plenty of room on the app store shelf for more. In first three columns, here is a look at how enterprise apps are projected to evolve over the next few years:

And now for the shameless plug…

Authors of this TechCrunch article probably need to demo miVEDiX. Since our product was launched four years ago, we’ve been operating on the mobile-first mentality – basically because there wasn’t an industry term to describe what we were doing. miVEDiX operates on mobile, and unlike many of our competitors, we don’t rely on HTML5 to connect our users to their data. Every piece of miVEDiX is natively programmed and relies on the full functionality of Apple, Android, and Windows devices. One feature that illustrates this best is our Frame-to-Frame interaction, which you can see in the video below:

Because miVEDiX is made for end users, our designs are created to make analysis and interaction as simple as possible. Whether the application is being used by physicians, field workers, or sales people, we help users get the most out of their data through authentically mobile solutions. Our best example of this is the physician rounding app. The app makes it easier for physicians to conduct rounds by consolidating patient health histories, sending alerts based on critical health conditions, and acting as a hub for recording new patient information. Through miVEDiX we’ve been able to securely improve operations and improve overall care. But, we’re also working to put these same technologies in the hands of patients.

What do you think about authentically mobile? Let us know in the comments if you agree with the score card above.

A Life of Pi: Memories From a Data Scientist

How Google Maps APIs are fighting HIV in Kenya