Making room for Big Data in the C-Suite 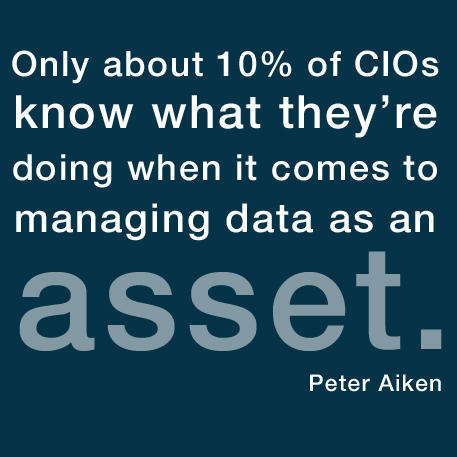 The world of information management is rapidly growing. Careers are being transformed as positions like Data Stewards, Database Administrators, and Chief Data Officers are pulled into the limelight. Amidst this shift in IT infrastructure, we need to know how to fulfill these new roles and how we can deliver on the potential of the data revolution. Information Management recently published an article describing “Why the Chief Data Officer is More Vital than Ever” with the help of professor at Virginia Commonwealth University, industry adviser, and author of , “The Case of the Chief Data Officer.” Peter Aiken. Here are some key takeaways from the article at large:

Re-casting the C-suite to Leverage Your Most Valuable Asset:
There are an awful lot of people in IT who know that data hasn’t been going well. This new emphasis on big data means that efforts with data are going to continue to go poorly over the next couple of years. There are several reasons for that, but the most important is – without trying to sound harsh – when we look at what we’ve asked CIOs to do, they are responsible for infrastructure, application software packages, Ethernet connections and everything in between. It’s an incredible range of jobs. If you look at a chief financial officer, they have a singular focus on finance, because finance and financial assets are a specific area the business cares about. A chief medical officer doesn’t have ancillary duties like making sure their hospitals are stock with supplies. Unfortunately, for our CIOs we have set them up to not be successful information officers. Taking data as a strategic asset gives it unique capabilities, and when you take the characteristics of data and you see the breadth and scope of CIO functions, they don’t work together. It hasn’t worked, it’s not going to work, especially when you consider the other data plans coming down the pipeline.

Define and distinguish the Chief Data Officer role from CIO & Data Scientist:
What we’ve seen is that most data scientists are incredibly ineffective. They take on average three years to become useful to the organization. While they may understand statistics, algorithms and analytical predictions … they know nothing about the domain in which they’re operating. Developing that domain and specific knowledge takes another three years. I’m very gloomy about the prospects of a data scientist solving most [enterprise challenges]. We have companies coming to us saying they can have someone who’s a CDO and a CIO. That doesn’t work because you need to be singularly focused on data. Just taking a CDO and having them report to a CIO is not a recipe for success in this area either. For the CDO, only after working on the data part for a year will you have an idea of the size and scope of the data challenge for your organization. This is when you find, for example, there’s a guy with a SQL server under his desk who asks you not to rat him out. And you can’t. People set these things up because IT can’t handle these data projects. That’s part of the reason why MDM and other aspects of data management are failing [internally].

How to set up a Chief Data Officer role:
Three-quarters of the CDO roles were created in the last year … On top of that, three quarters of those roles report back to IT. IT correctly discovered project management in the last 10 years. That’s great, but data is not a project. So the CDO reports to the business. For example, business data architectures is a business function, not an IT function. In fact, the only data management areas that stay behind with the CIO are the actual development of databases and the tuning, backup and recovery of the data delivery systems, with security shared between IT and business. Another one of the contentions is that data management must precede and be separate from the systems development lifecycle. None of those work if you’re trying to develop data assets at the same time as you’re trying to develop these systems. Lastly, it has to be a full-time position. We have to overcorrect for the negligence we’ve given this [role] in the past.

What does the future look like:
We’re seeing about 7 percent of organizations that are actually considering a CDO role or have implemented one as of this year. MIT has a CDO role event this summer, so we’re starting to get conferences and attention around it, Gartner is making its case, though they align the CDO as a chief data officer or a chief digital officer. So I’m hoping there’s momentum. We’ve seen these silver bullets rise and fall pretty regularly. We won’t reach the tipping point this year, but as something like big data becomes less of a buzzword and takes on more of a practical practice, that’s when people may start to sit down and think about data roles differently.

What’s your take on the Chief Data Officer? Read the full report at Information Management.com