To Seek Out New Life and New Civilizations, and Also Really Big Numbers 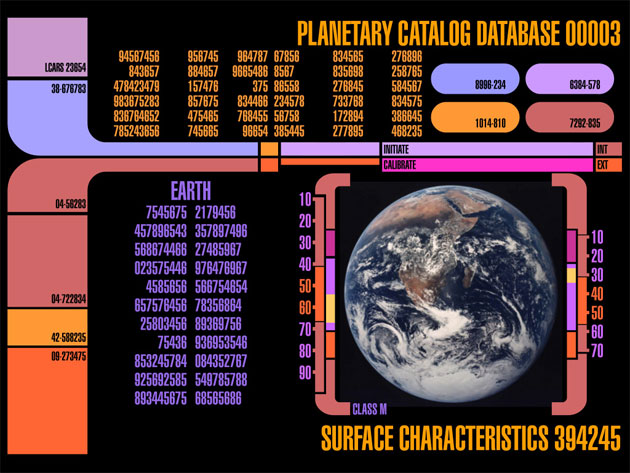 Hi all! Today I’m going to be writing about the way science fiction influences the way we think about our industry. Also, there will be Star Trek in here. Lots and lots of it.

Moore’s law states that the number of transistors found in integrated circuits doubles about every two years. Without getting too far into it, this increase roughly translates to a commensurate increase in computing power. Now, we could say that Moore’s Law is more of an observation than a law, but it is easy to see that the general theme behind the theory is correct: computers get better, faster, and more powerful at an almost exponential rate.

The writers of Star Trek: The Next Generation were operating under similar premises, though I cannot say for sure that they knew of Moore’s law (some of them probably did — a lot of smart people worked on that show!). But anyways, by the time 2365 rolls around the USS Enterprise is equipped with a computer core that makes a hilarious mockery out of anything you or I could conceive of today. People a lot smarter than me have cobbled together some interesting information over the years, and you can find whole webpages devoted to Star Trek nerd-wizardry. Specifically, there is some neat stuff about the Enterprise’s computer systems. According to the technical specs, the main computer core of the USS Enterprise runs about 4,600 kiloquads a second. What’s a kiloquad you ask? Well it’s totally made up, that’s what it is! This person went ahead and tried to figure out the best approximation of this great piece of technobabble, and he determined that a kiloquad is about 2^100 bytes. For comparison, 1 terabyte comes in at 2^40 bytes. So clearly, our friends in the future can stream a lot of Star Trek episodes at the same time.

A massive amount of storage requires an equally robust operating system in order to interact with it. The Library Computer and Retrieval System (LCARS) was the writers’ solution to this need, and it ushered in one of the more recognizable science fiction tropes in pop culture, that of the talking computer that also responds to a variety of inputs (tactile and voice being the two most popular).

What’s interesting to me — and the reason this blog post is relevant and hopefully why you’re reading it — is that even way back in the 1980s, people were envisioning the growth of computer systems, but also the growth of their related systems like database models and shiny interfaces. Think about it: how on Earth do you store that much data, and make it accessible to a person? Forget about access speeds and kiloquads for a second. What does the actual interface look like? Is it intuitive? Does it make sense? Does the division of data within the system take advantage of the hardware it is connected to? And finally, how do you get the data out?

Arthur C. Clarke once wrote that in science fiction, “Any sufficiently advanced technology is indistinguishable from magic.” Of course, people working in BI are not working magic. We are utilizing some pretty sophisticated technology to drive our respective industries forward, but there’s nothing mystical about it. But sometimes I do wonder what all of this would look like to a business person of a bygone era, maybe a Rockefeller or a Hearst. They were considered captains of industry in their day, but they would probably lose their minds if they had access to the amount of data that currently exists. If they saw someone whipping through a mobile app to create an instant visualization of how many hog bellies they shipped via the Erie Canal, I’m not sure what they’d do. I’m not sure what I would do!

So I guess the whole point of this rather long post was to remind myself that so much of what we are doing in Business Intelligence, Big Data, and Mobile application development would seem like magic to our industries from 100 years ago. It is a good thing to remind ourselves that the unthinkable happens every day, and the unimagined is only that — unimagined — until someone imagines it. The writers of yesteryear filled their science fiction with impossibly fast computers and mind-bending increases in technology, and although we don’t yet have a holodeck, we seem to be influenced by their vision. Sometimes, it seems, the only difference between science and science fiction is time and determination.

** Special thanks to Dr. Jean Michel Guillemin Laborne, our CIO and Chief Data Architect, for helping me to decipher this fake but still terrifying bit of math.

What other Series, Movies, or Shows have inspired your Business Intelligence?