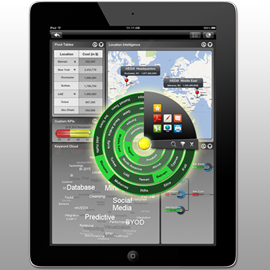 Alas, we have made it. Goodbye clunky old desktops, hello sleek new iPads. The vast new frontier of Mobile BI is taking the market by storm and many companies are scrambling to make their BI products available for the masses. Often, BI products are branded as “mobile enabled”, a fancy word for the “design once, deploy twice” methodology. These apps are typically HTML5 based and fail to take advantage of built-in functionality in the mobile OS. Interfaces are clunky, buttons are too small and that ‘Print’ button… what exactly is it supposed to do when you’re away from your office? Below are 5 major design elements to consider when creating a Mobile BI app.

1) Take advantage of mobile libraries and APIs
iOS and Android have a lot of native graphics libraries that developers can use to their advantage. Why reinvent the wheel when Apple and Google have already done it for you! From buttons and other functional elements, to OpenGL capabilities, the opportunities to move beyond Java are not only plentiful, but easier to implement and more visually appealing to the end user. Visual appearance is now a major component in BI platforms.

2) Mobile users send emails, they don’t print
When was the last time you saw someone on an iPad attempt to print a document? Sure, it happens, but it’s quite rare. Instead of making a ‘Print’ button the default option, try “PDF & Email” instead. Mail integration is second nature in most apps these days, use it!

3) Understand that Mobile is a different paradime, and embrace it
Incorporating mobile interactivity in a BI app is far more likely to capture a user’s attention than static screens. Let’s expand on the “PDF & Email” example above, knowing that users love to touch, swipe and draw on their tablet. What if, instead of simply taking a snapshot of the screen and sending it to your colleague, you could use your fingers to circle the charts in question and draw arrows on the screen? Wouldn’t your co-worker be able to better comprehend which retail location you’re concerned about due to lackluster sales? This act is so intuitive on a mobile device, that it seems almost second nature.

4) Select the appropriate chart
Typically, a line chart would have to fit entirely on one screen.
Not anymore. Take advantage of the ‘off-screen’ element in mobile design by letting the line continue and encourage the user to swipe to see more. Personal interaction used to be an afterthought with analytical charts and graphs, now it’s at the forefront of design.

5) Embrace Responsive Design
No-one is running a 1024 x 768 screen anymore. In fact, there are such a large variety of screen resolutions out there that a designer would go insane if he had to account for each and every one individually. Enter the world of responsive design. It embraces flexibility and the notion that “no two screens are the same.” It may take more effort than a traditional screen layout, but it will eliminate stretched logos, garbled text and the black-box effect on any mobile device. Ultimately, the design will keep users coming back. For more information on Responsive Design: http://www.lukew.com/ff/entry.asp?1514

These are just some of the principles we use everyday in developing our mobile BI, to learn more about miVEDiX visit https://ivedix.com/mobile/

When he is not focused on preventing the next economic meltdown, he is an avid Business Intelligence and analytical whiz kid. Nate naturally leans towards understanding the business before jumping into carving out a solution. He has an incredible affinity and appetite for BI tools. Caution: His enthusiasm is infectious.